Programmatic advertising has become one of the fastest growing channels of digital marketing due to its inherent abundance of media inventory and buying efficiency. It offers mobile app advertisers the opportunity to find the right audience for their ads at the right price. But there are a few different ways to acquire media inventory programmatically and app advertisers are sometimes confused about which is the best method. To lessen the confusion, we will unpack the differences between the three ways of programmatic media buying: open auction, private auction, and preferred deal.

In programmatic, open auction is the official term for real-time bidding (RTB). In an open auction (open marketplace), inventory prices are decided in real-time through an auction and any publishes or advertiser can participate. Essentially, publishers make their media inventory available in an ad exchange at a specific minimum cost per thousand (CPM) price and advertisers bid against one another for the available media that they desire. The highest bidder wins the impressions.

If you are looking for the most cost-effective way to buy media with access to the largest audience, open auctions could be the way to go.

On the other hand, preferred deal is an option that bypasses auctions completely. Preferred deal makes it possible for publishers to sell their premium media inventory at a negotiated fixed CPM to selected advertisers. The deal is then transacted in real-time and advertisers will win the impressions by bidding at or above the fixed CPM price set by the publishers. Preferred deals provide publishers with a controlled and stable revenue stream through this secluded transaction environment. Meanwhile, advertisers benefit from the deal because it gives them access to more exclusive, first-look inventory with stable volume and no surprises on pricing. The only caveat here is, however, if advertisers bid on a preferred deal impressions, they are no longer eligible to bid on that same impression in the open auction. 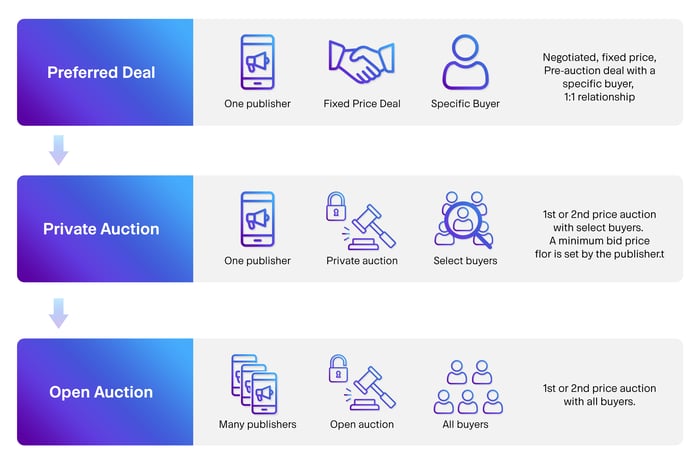 To sum it all up, open auction allows all publishers and buyers to bid in real-time. Private auction operates in the same way. However, participants include one publisher and multiple advertisers who have been invited to bid by the publisher. Lastly, preferred deal is a direct deal between publishers and advertisers at a negotiated fixed pricing. Your choice between the three different ways to buy programmatically should be dependent on your app marketing campaign goals.

Your choice between the three different programmatic buying methods should be dependent on your app marketing campaign goals and budget.

Our latest white paper “A Beginner's Guide to Programmatic” will help you to get a clear understanding of the key programmatic components and how they interact with one another.