Casual games are one of the most beloved mobile game categories. These games are designed for quick play and they are ideal for people who want a brief distraction, maybe during a commute or waiting in line. There are several categories under this genre such as card, board, puzzle, match 3, merge, shooter, and sports. A casual game app usually features a simple interface, along with bright colors, sounds and animation. Thanks to easy but exciting gameplay and engaging illustrations, this genre is guaranteed to always be at the top of app store charts.

One of the biggest gaming app companies reached out to Aarki to run a user acquisition campaign for their beloved casual game app. They wanted to widen their user base and sought a demand-side platform (DSP) partner to help in delivering high-value users with a strong return on investment (ROI). Aarki was a perfect match for these criteria. The campaign targeted US-based users owning Android mobile devices.

We started the campaign with extensive research into the client’s website and app store pages. We sought to learn more about special app events, new features, and updates. Along with first-party data provided by the advertiser, we investigated the app’s user behavior and previous campaign performance data.

This research provided us with a foundation on which to produce enticing creatives and build custom machine learning models to meet the campaign's key performance indicators (KPIs).

Using the right ad format for your specific campaign gives you a performance advantage.  For this campaign, we focused on reward and non-rewarded (interstitial) video ads. Rewarded videos are non-skippable, opt-in video ads that present users with incentives, such as extra game lives, bonus coins, etc. As a result, this ad format has very high completion rates. App marketers also benefit from the non-skippable feature of this ad format, and users see the entire video ad. Unlike rewarded videos, non-rewarded videos (also known as interstitial ads) are full-screen ads that are usually displayed inside apps, at transition points in the content. This means they are less likely to negatively interrupt the user experience.

Based on the difference in the performance of rewarded and non-rewarded video ads we decided to have a separate campaign for each ad format to allow for better optimization and to target users on a more granular level. Our analysis showed that interstitial video ads worked better for the target app and aligned well with the campaign's goal to widen the app's user base. Given that these ads have a bigger inventory, they were spending 50% higher than the rewarded video ads which resulted in a 21% higher D7 incremental ROI than rewarded video ads.

With this, we increased bidding on interstitial video ad format and designed ad creatives that were tailored to the interests of the target audiences by encouraging them to play the game. It’s also worth noting that our other video campaign focusing on rewarded video ads proved to be a success too.

Below are the creative strategies that performed successfully for our casual app campaign audience.

Aarki uses proprietary data to build predictive machine learning models that forecast the probability of in-app events at an optimal acquisition price. Our data scientists develop advanced machine learning models to reach and acquire prospective users and deliver strong ROI for each campaign. We also ensure a high probability of installs and engagement by leveraging artificial intelligence (AI) to serve an optimal personalized creative variant to each user.

Our data scientists continuously tested and optimized the campaign  machine learning models. Over the campaign period, increasing amounts of data points were collected. This allowed the models to learn and improve their accuracy. Thus, as seen from the graph, over time the event rate became closer to the (predicted) event probability. 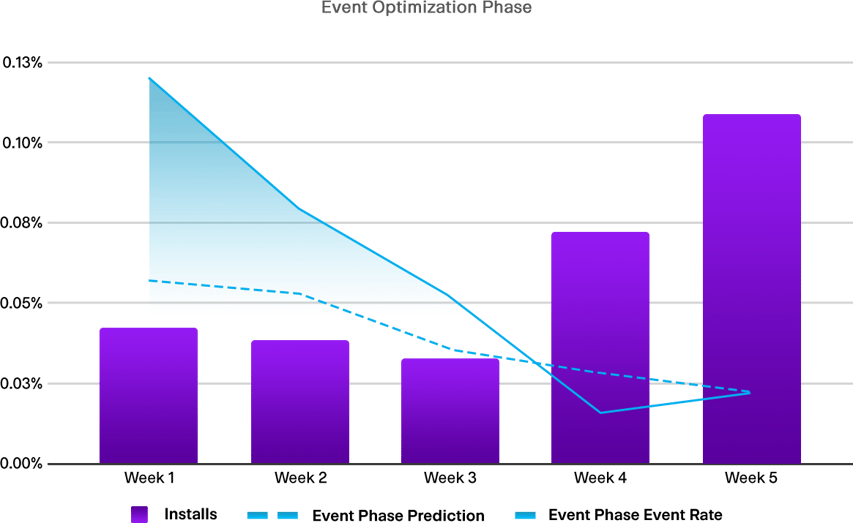 As seen from the results below, this campaign was a huge success. Our experience in client coordination and our deep understanding of the client’s business problem and goals made a strong impact on the overall performance of the campaign.

Aarki’s numerous creative optimization and machine learning techniques, as well as our core understanding of the app and the ability to focus on the right ad format, helped not just to increase targeted events but also to register an increase in volume, which met and exceeded the client's main goal. Below are presented the results we achieved through our campaign with non-rewarded video ads. 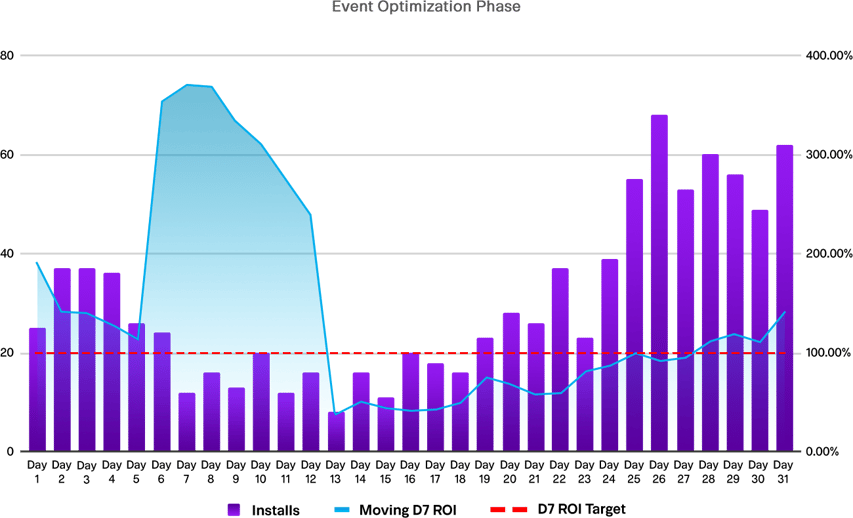 Overall, volume for interstitial ads increased up to 2X while remaining the top spender for video campaigns

Leveraging a rich database of audience and user engagement data, Aarki’s data scientists use robust machine learning algorithms to find audiences who share similar interests and are most likely to engage and spend with the app. This enables Aarki to consistently deliver strong app marketing performance no matter the app marketer’s retargeting goals.