What is Real-time Bidding (RTB)? How does it work?

If you are new to the Programmatic advertising industry or are considering dipping your toe in the water, chances are you might get lost in all the terminology and processes.

Programmatic is fast becoming the main choice for app developers to advertise their apps. In fact, the Interactive Advertising Bureau reports that programmatic media buys account for an estimated 85% of all digital ad spend. We bet that you don’t want to get left behind, so in this article we will give you a solid foundation from which to start your journey into programmatic advertising.

What is Real-time Bidding?

To grasp what RTB exactly is, let’s start by defining what “programmatic advertising” means. Programmatic is an umbrella term that refers to the automated method of buying and selling mobile ad inventory with high efficiency, through targeting specific audiences and demographics. RTB on the other hand, is simply how advertising inventory is bought and sold on a per-impression auction basis. These transactions take milli-seconds to execute, so they are referred to as “real-time” bidding.

A common analogy used to describe RTB is the stock exchange, but for an ad campaign.

How does RTB Work?

There are three main players in the programmatic landscape: DSPs, SSPs, and Ad Exchanges. In this recent article we go into depth and give a detailed description of each of these players, but here is a quick synopsis:

Now that you know the ecosystem players, let’s review step by step how RTB works.

What are the types of auctions in real-time bidding? 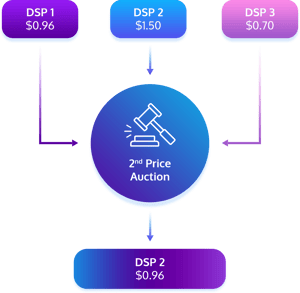 If you have ever bought anything on eBay, you are probably familiar with the second-price auction, where the winner pays the second highest bid rather than their own (thus the second-price name). For years, the second-price auction model has been the gold standard for auctioning mobile ad inventory. This auction model often encouraged aggressive bidding, given the likelihood that the successful advertiser will pay a lower price. While buyers often benefited from this strategy, publishers were not able to maximize the value of their inventory and sell it for its true value to advertisers. 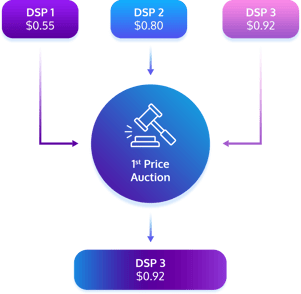 As the industry evolved, more and more bidders have begun to support the first-price auction model, which allows for a more simplified approach to auctions, although it requires more sophisticated bid models. Here the highest bid wins and the advertiser pays exactly what they bid in the auction.

Ultimately, the main difference between first-price and second-price auctions is in the way the bids are finalized.

It’s never late to turn to programmatic to maximize the monetization of your app. At Aarki, we continue to work on materials to make it easier for you to tap into this market. If you haven’t visited our whitepapers page yet, we encourage you to do so to get acquainted with the basics of programmatic buying.