Mobile app marketers should not rely solely on clicks to accurately measure the impact and effectiveness of their advertising campaigns, which is why a different method of attribution needs to be employed - view-through attribution.

View-through attribution (VTA) is a means to track installs, or other events, for users who do not click on the ad, but take an action that is directly influenced by having seen the ad. This is also known as impression attribution.

A simple example is when a user is served an ad by an advertiser, but instead of clicking, they go directly to the app store and download the app. With VTA, the advertising activity and the marketing partner is credited, which is why it is not counted as an organic install.

With click-through attribution, a new download is attributed to an ad only if a user clicks on it. An interesting scenario to consider is where a user clicks on an ad, but chooses not to install the app at that moment. A few days later, the user views another ad for the same app and does not click, but later goes to the app store directly and installs the app. With click-through attribution, the credit goes to the click, not the impression, even though the impression was crucial to driving the app install.

Despite being difficult to quantify, it is important not to overlook the value of your impressions.

MobilityWare contacted Aarki to run a programmatic advertising campaign to understand the impact that view-attributed app installs have on the machine learning bid predictions for their Pyramid Solitaire app.

To determine the value of view-through attribution (VTA), we analyzed the campaign for Pyramid Solitaire app over a period of 80 days. The advertiser aimed to drive quality app installs and higher-quality users. Our in-house creative team designed multiple creative variants which were tested across thousands of publishers with VTA enabled, through our proprietary creative suite, Aarki Studio. Through VTA, we tracked ad impressions and gained important data to feed our models, which led to more precise predictions.

After testing and comparing the performance of the creative through multivariate testing and machine learning strategies, we noticed a considerable impact on Install Probability, Cost per Install (CPI), and Retention Rate (RR). 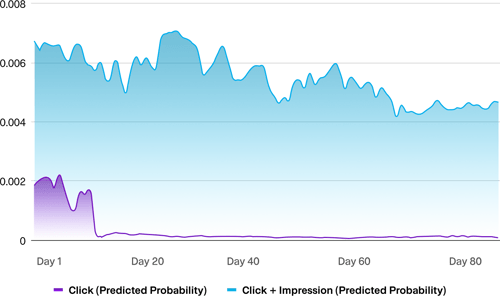 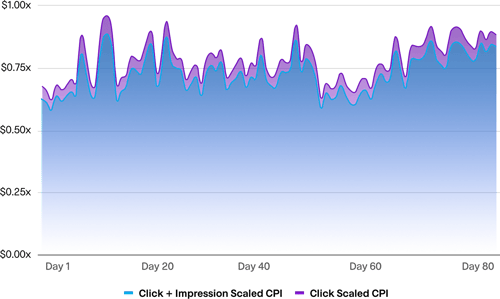 You can find the complete success story with MobilityWare here.

The results revealed that measuring and optimizing for VTA led the campaign to have strong performance on the client’s key KPIs. As the Predicted Probability increased, our models started bidding on higher CPM tiers, where we saw better install rates and higher-quality users.

This shows that with impression measurement methodologies, advertisers and app marketers can understand how impressions play a key role in the attribution lifecycle. This allows both the advertiser and app marketing specialists, like demand-side partners (DSPs) such as Aarki, to determine the true benefit of the ad spend and its effectiveness.

Shoot us a message here to know how Aarki can help you reach your app marketing goals.