The State of Programmatic in Russia

The number of companies in Russia who are focusing on digital transformation doubled between 2018 and 2020, making it a big priority for businesses in the country. This involves investing in new technologies, such as mobile app development and advertising, to enable a more customer-driven strategic approach to business.

With a population approaching 150 million, Russia ranks 6th as the country with the most smartphone users in the world. According to NewZoo, it has a total of over 99M users, with a 68.5% penetration rate in 2020, making it a landscape suitable for mobile advertising.

Russia also has a very high number of mobile internet users, which is expected to grow to 62.5% by 2023. This makes their mobile marketing landscape very competitive compared to other countries in the region. Russia is the top smartphone market in the CIS region, which drives the surge in data demand by users, According to GSMA, smartphone connections will reach 168M in Russia by 2025. 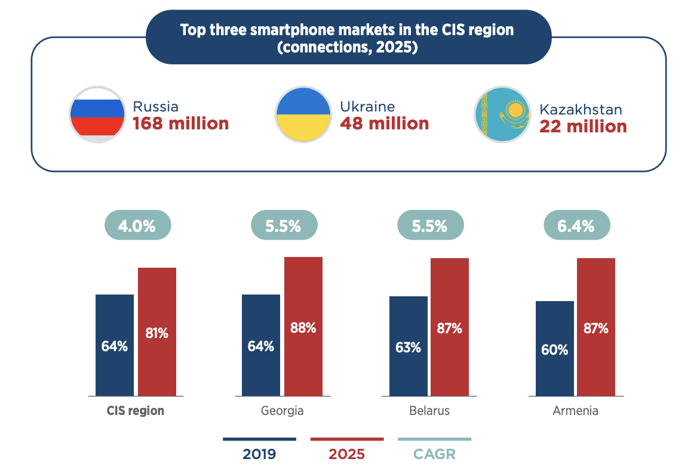 It was found in We are Social and Hootsuite’s Digital 2021 Report that 20.6% of smartphone and tablet users in Russia aged 16 to 64 discover new brands that they have not heard of through ads from their smartphones or tablets. This falls a little below consumer review websites, which shows that mobile advertising can be as effective in promoting new brands or products. 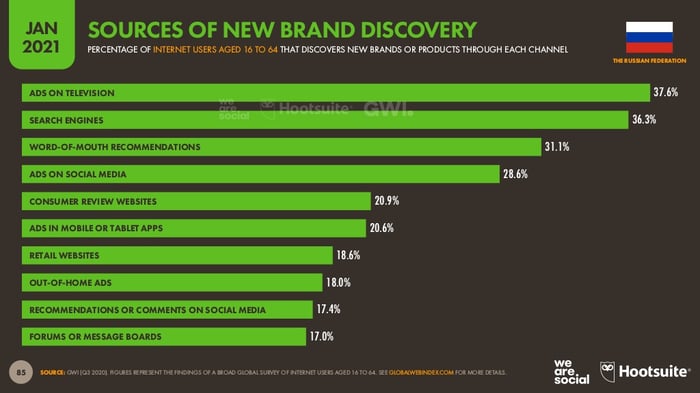 Source: Digital 2021: The Russian Federation, We are Social and Hootsuite

Because of COVID-19, more and more people have been using their mobile phones for practically everything: entertainment, banking, exercise, food delivery, messaging, etc. 78% of Russian publishers release non-gaming apps, and the remaining 22% are games. This suggests that the majority of the country focuses on apps rather than mobile games. Due to the lockdowns and social distancing policies, data from Sensor Tower showed that messaging and entertainment apps were the most popular apps in Russia for Q4 2020.

Telegram, a well-known messaging app, had 6.5M downloads. It was found to be the most popular in Russia, with 38% of the app’s European downloads coming from them.

TikTok, the top app in Europe for that quarter, had Russia as their top market, with the country accounting for 31% of the app’s downloads in the region.

Although gaming apps are not that popular in Russia compared to other app genres, it still has a very low cost per install (CPI) compared to global benchmarks which sit at $0.86 and $0.44 for iOS and Android, respectively.

Aarki has been running winning mobile programmatic campaigns in Russia for a while now. If you would like to learn more about how Aarki can help you scale there, shoot us a message here.