Regional Analysis of the State of Mobile Gaming

Mobile Gaming is on the rise, and the pace is not going to slow down anytime soon. According to Sensor Tower’s State of Mobile Gaming in 2021, consumer spending on mobile games surpassed $22 billion in Q1 2021, representing an all-time high and 25 percent year-on-year growth.

In our previous article we covered the overarching trends and challenges of mobile gaming and now, we explore the state of mobile gaming by region, to have a clearer understanding of the market and make more informed decisions.

The United States is still leading the mobile gaming market in terms of consumer spending on mobile games, overtaking Japan in Q2 2019, and it looks likely to hold its position for the foreseeable future. According to Sensor Tower, with 34% YOY growth in Q1 2021, which equals more than $1.5 billion, the U.S. game revenue growth has outpaced the worldwide rate for each of the past three years. Japan and China were the next largest markets, well ahead of any other countries. 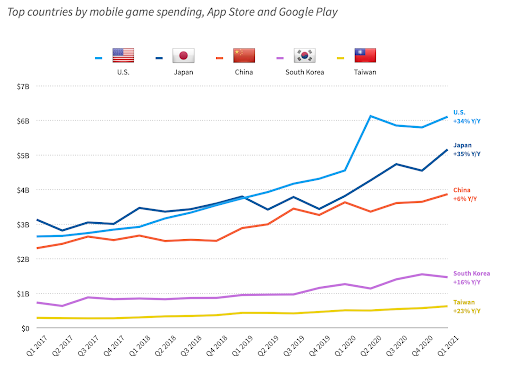 In addition, the U.S. share of global consumer spending in games reached an all-time high in 2020 of 28%. That was higher than Japan at 22% and China at 18%. It should be noted, however, that Sensor Tower’s estimates for China include revenue for the App Store only, since Google Play is not available in the country.

The popularity of mobile gaming is most evident in Asia. As the mobile game spending graph presented above shows, the combined revenues generated from Japan (22%) and the rest of Asia (28%) surpasses $12 billion, eclipsing those generated by the US (28%). The Asian market includes Japan, China, South Korea, and Taiwan, and represents half of the gaming segment’s total market share. Four of the top five countries globally by mobile game revenue are in Asia, with the U.S. as the only exception. It is to be noted that China’s revenue only includes the App Store, as Google Play is not available in the country.

When it comes to mobile game downloads, India is in the lead, accounting for 12% of game downloads in Q3 2020 reaching 3 billion installs. 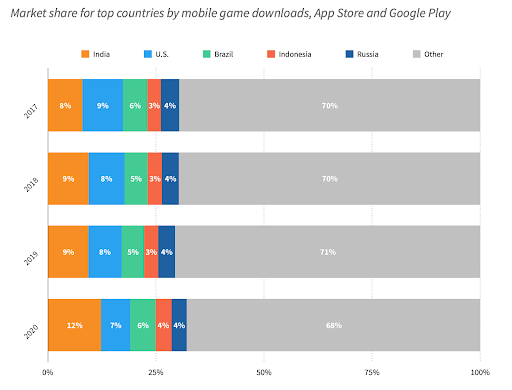 Some other countries, including Indonesia, the Philippines, and Pakistan, have also seen strong download growth. 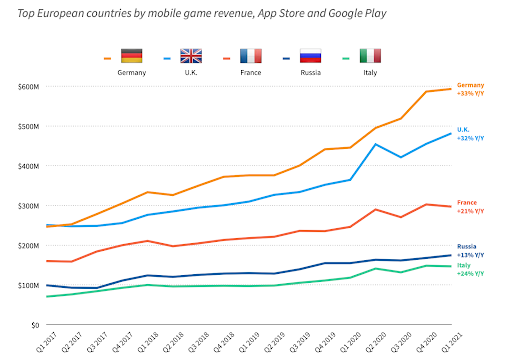 When it comes to downloads, Russia was the top European market in Q1 2021 with 758 million downloads, followed by Turkey at 537 million installs.

Africa is one of the fastest-growing regions in the global app market with all numbers going up from the start of 2020. AppsFlyer and Google have analyzed the state of mobile apps landscape in Africa, tracking mobile app activities across three of Africa’s largest app markets (Kenya, Nigeria and South Africa) between Q1 2020 and Q1 2021, to help marketers to tap into this territory.

According to the report, 2020 was prominent in terms of a huge increase in downloads of gaming apps, which increased by 50% in Q2 2020 compared to Q1. Moreover, non-organic gaming installs had an increase of 56% most likely because app marketers saw an opportunity to promote their game apps in the period where users were spending a lot more time at home playing games.

Although the African app market has grown significantly, there are several challenges to tackle. One of the main challenges app marketers can face while tapping into this territory is data and connectivity challenges. At the end of 2019, mobile internet adoption in Sub-Saharan Africa was at 26% which is significantly lower than the global average of 49%.

The future looks bright for mobile gaming, as Africa is the only region in the world where the youth population is increasing, opening endless possibilities for marketers to grow their audience in the gaming category.

Mobile gaming is growing worldwide and the trend is expected to continue in the foreseeable future. Sensor Tower forecasts that by 2023, the Southeast Asian gaming market will see a 90% revenue growth, surpassing the worldwide average and beating Europe which is forecasted to see a 76% growth over the same period. 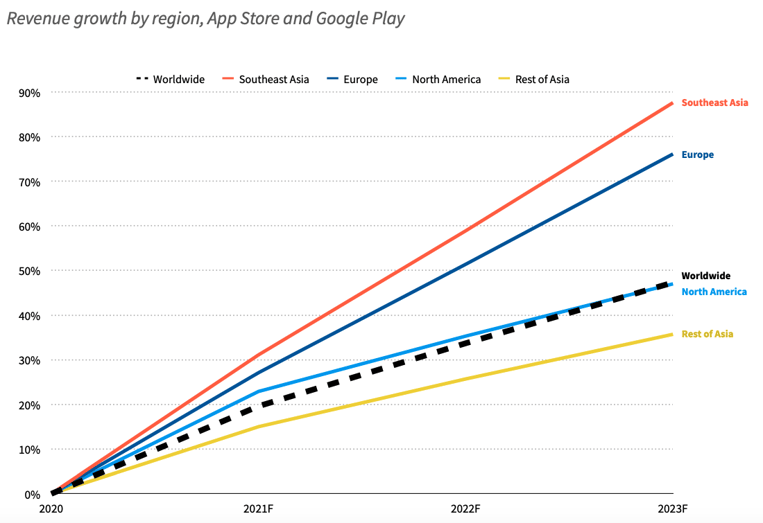 With mobile gaming revenue forecasted to reach $117 billion by 2023 (a CAGR of 13.5 percent), are you ready to maximize your potential in the field? Shoot us a message if you are looking for strategies to tap into new markets.

About the featured reports