The popularity of gaming - particularly mobile gaming, skyrocketed in recent years, and over the course of last year, it has sealed its place as the main means of modern entertainment.

Despite challenging circumstances, such as the pandemic, iOS 14 privacy changes, and the rise of other app verticals including shopping and social, the gaming industry generated over $174 billion in 2020, which is a 19.6% year-over-year increase according to global gaming statistics from Newzoo. Moreover, it is forecasted that it will top $217 billion by 2023 with the mobile sector having the most significant contribution.

Mobile gaming has become the key gaming industry driver in 2020 with its revenues accounting for 49% of the global market. The main growth factor was the ever-expanding population of 2.5 billion gamers who are willing to spend money for their entertainment.

As a result, according to AppAnnie, mobile gaming drove 72% of spending in app stores last year, demonstrating its appeal amongst mobile users.

There is no doubt that mobile gaming will continue to grow in 2021 and game developers and marketers need to take advantage of that and create strategies to win in this crowded market. To tackle this task, let’s review the most critical mobile gaming trends for the year ahead.

1. Gender and Age Breakdown of Mobile Gamers is not what you expect

Nowadays, you can hardly find a person who does not play mobile games. Knowing who plays your mobile game can help you increase your engagement and relevancy.

MoPub has gathered statistics that shatter several stereotypes connected to mobile game audiences. Here are some highlights. Did you know that 51% of mobile gamers are women? Or that mobile gaming sessions last 25% longer on average for women than for men? Another interesting statistic by Google Play and NewZoo is that 43% of female gamers play more than five times a week while only 38% of male gamers play that often.

And what about age? Today, the average age of a mobile gamer is 36.3 (compared with 27.7 in 2014). According to MMA Global, “the 16-24 age group represents a mere 14.2% of mobile gamers, while people older than 45 years make up nearly a third. So mobile gamers are more likely to be middle-aged moms than their teenage sons.”

Accessibility and technological innovation are the main factors driving the mobile gaming boom. In 2020, the gaming industry experienced a shift in focus towards being mobile-first to fit the modern on-the-go lifestyle of the users. This included game studios that traditionally focused on developing only for PC.

The technological innovation of smartphones is another impetus for PC game developers to focus on mobile. With all the advancements in smartphone hardware and software, they don’t need to sacrifice the quality of the game. As a result, some of the most popular games from PC and console are now available on mobile.

In fact, according to Game Analytics, in Q1 of 2020 the number of mobile gamers increased by 46%. Moreover, App Annie states that consumers spent over $19 billion on mobile games in Q2 2020, representing the largest quarter yet.

While the number of hardcore-focused gaming experiences on mobile are increasing, casual gaming still makes up a significant percentage of mobile games. According to SensorTower’s Industry Trends report, hyper-casual titles have dominated the 2020 top charts surpassing 10 billion installs in 2020. The report states that the adoption of the top 1,000 hyper-casual genre games grew 45 percent year-over-year in 2020. The reason for the popularity of this genre is that consumers flock to simple games amid quarantine. They are easy to play and relaxing: just what the doctor ordered!. 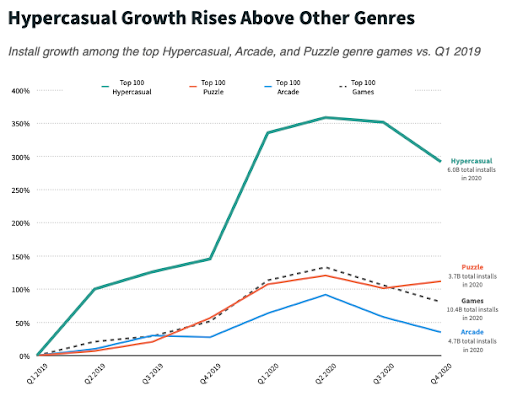 4. eSports is on the Rise as the Popularity of Watching Games Increases

More and more gamers now are watching sports instead of playing, which leads to the forecast that one of the biggest mobile game market trends of this year will be mobile eSports. According to Newzoo, there were almost half a billion eSports viewers in 2020. This trend is expected to continue in 2021 as the popularity of watching games is constantly increasing, substituting face-to-face sports.

One of the main reasons why there has been growth in eSports viewership is because more people are learning about it. Esports awareness is increasing through several methods, one of which is the impact of social media influencers. Alexandria Ocasio-Cortez, a U.S. representative, played the game “Among Us” for charity and more than 400k people watched the stream.

But what does this mean for developers?

Mobile game developers need to consider integrations for streaming channels. This will make it easier for gamers to play and stream their games. The bonus of this strategy is free and paid promotion opportunities. As we know, gamers value the opinions of other gamers will download a game recommended by other players and gaming influencers.

Apple’s privacy changes have shocked the mobile advertising world and mobile gaming is not an exception. Apple now requires the user’s active consent before their IDFA can be accessed in each app for cross app tracking. This has caused difficulties for app developers and app marketers as marketing strategies targeting IDFA have been interrupted by Apple’s prohibitions.

Prior to the privacy changes, it was easier to drive results from users who were served personalized ads with the help of IDFA. The reality has now changed, and the industry is still adapting to the updates.

There are many uncertainties in the field, however, what is certain is that marketing creatives are now more important than ever. This is where game publishers should invest: creating outstanding ad creatives. In our recent article, we share several tips on how to optimize your ad creative post-IDFA.

6. In-App Subscription Model is on the Rise

Subscription has been a popular monetization method for non-gaming apps and now is finding its way into the gaming industry, as a growing number of titles have found success with in-app subscriptions, optimizing revenue streams, and boosting retention rates. 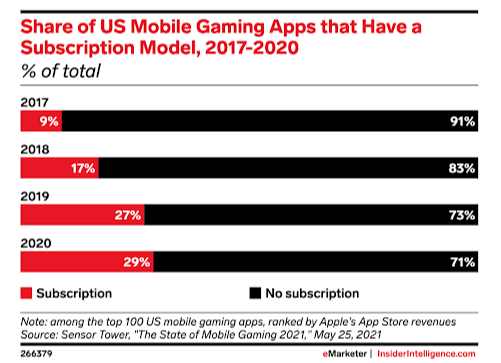 According to SensorTower, eight out of the top 15 grossing mobile games in 2020 have adopted in-app subscriptions as a monetization model, seeing higher long-term retention rates than non-subscription games in 2020. The report states that core games are more likely to adopt subscriptions:

The mobile gaming market is booming and it will continue to do so in years to come. Game developers and marketers need to rethink their strategies to win in this crowded market.