Years ago, when advertisers and publishers traded directly in the mobile advertising market, the media buying process was similar to traditional media and easily understood by media buyers and marketers. The era of programmatic advertising ushered in additional players and layers of technology, creating confusion among marketers who were unfamiliar with this new technology architecture.

Though both DSPs and Ad Networks connect advertisers to publishers, the way in which they do this is very different.

What is a Demand-side Platform?

A DSP is a technology platform that connects with ad exchanges and supply-side platforms (SSPs) to buy ad impressions through real-time bidding auctions (programmatically). It allows advertisers (who “demand” inventory) to manage, purchase, and optimize programmatic ad inventory through one interface.

What is an Ad Network?

An Ad Network is a media company that sells ad inventory across a range of publisher apps to advertisers at a set price. Ad networks are “middlemen” that work directly with publishers to sell ad impressions that a publisher has not directly sold. This process is not automated.

Transparency in mobile marketing refers to the elements of a marketing campaign that are visible to the advertiser, which allow them to gain insight into where the media purchased is running, what was actually paid, and how their campaigns are performing.

Most DSPs provide full transparency at the impression level, thus the advertisers can see the ad placement, the type of audiences they are able to reach, and what they are getting back from their ad spends. The advertiser shares their install and post-install events with the DSP  via their Attribution partners and the whole chain - from impression to end user event behavior - is recorded.  The campaign data, and the app events that are attributed to the campaign, can be viewed on reporting dashboards or passed via APIs to reporting tools that enable the advertiser to have end-to-end performance visibility.

Ad Networks, however, offer limited impression tracking and cannot provide real-time placement visibility. This is because inventory is aggregated across multiple publishers before being sold, and hence neither the publisher nor the advertiser knows where each impression is served.

In programmatic, the market determines the price of each impression, and impressions are paid through real-time bidding either through first-price or second-price auctions. The real value of each impression defines the cost per thousand price (CPM).

With Ad Networks, inventory pricing is predefined and fixed by the network. Marketers pay a fixed fee for a bulk of impressions (CPM), clicks (CPC), installs (CPI), or actions (CPA) irrespective of the value each impression brings.

Programmatic advertising automates the handshake between the advertiser and the publisher. All processes, from bidding to optimizations, are carried out automatically by the machine learning algorithms of the platform. This maximizes efficiency and scale. With only one DSP in their toolbox, the advertiser can reach the intended audience through millions of touchpoints at a time.

Unlike DSPs, Ad Networks require a lot of manual set up, which makes the process slow, especially when dealing with hundreds of thousands of campaigns at a time. When media buyers sign up for an account, they are assigned to a traffic manager at the ad network. The traffic manager receives the creatives and campaign details and then sets everything up on the ad server. 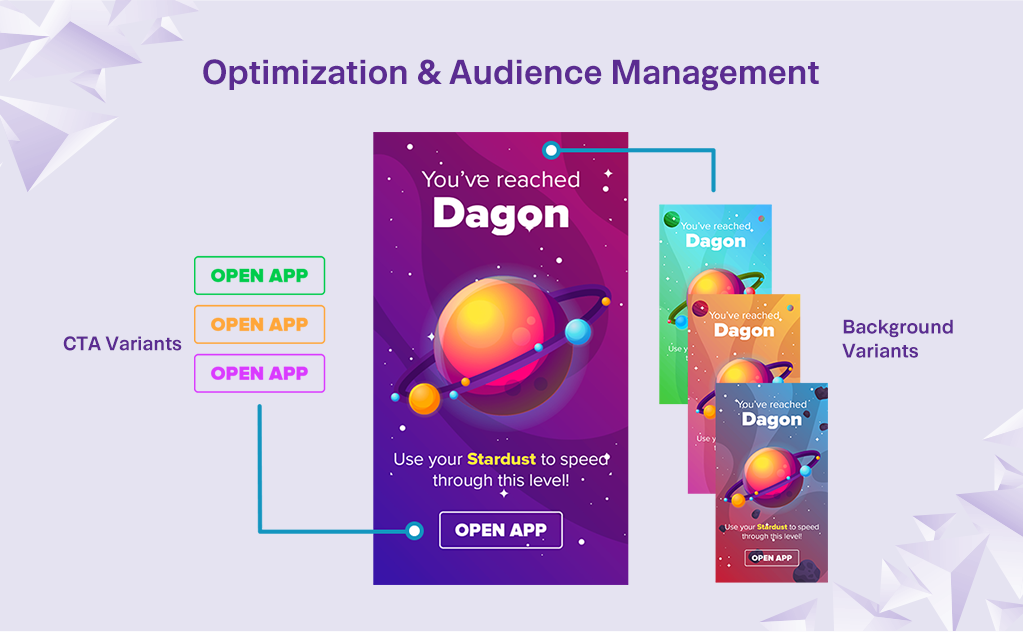 DSPs can deal with numerous optimizations at the same time, and creative and media buying optimizations can be done simultaneously. This accelerates the iteration and testing of different creative variants and ad elements while making sure every ad dollar is spent on high quality traffic.

With a DSP you can target a list of your specific users (called an Audience List) or target lookalike users. DSPs can conduct real-time changes on audience targeting and serve personalized creatives to those audiences. A good example of this is user-level attributes leveraged by Aarki to make hyper-personalized creative ads. By leveraging user attributes like recent spend, level reached, wallet balance, and more, we at Aarki create ads that dynamically optimize messaging to an individual user at ad serving time.

On the other hand, Ad Network’s creative optimization will be limited to a simple A/B test that can take time to generate learnings. Also, Ad Networks have pre-defined audience segments and categories which cannot be changed or updated by the client.

Let’s summarize the main features of Ad Networks and DSPs: 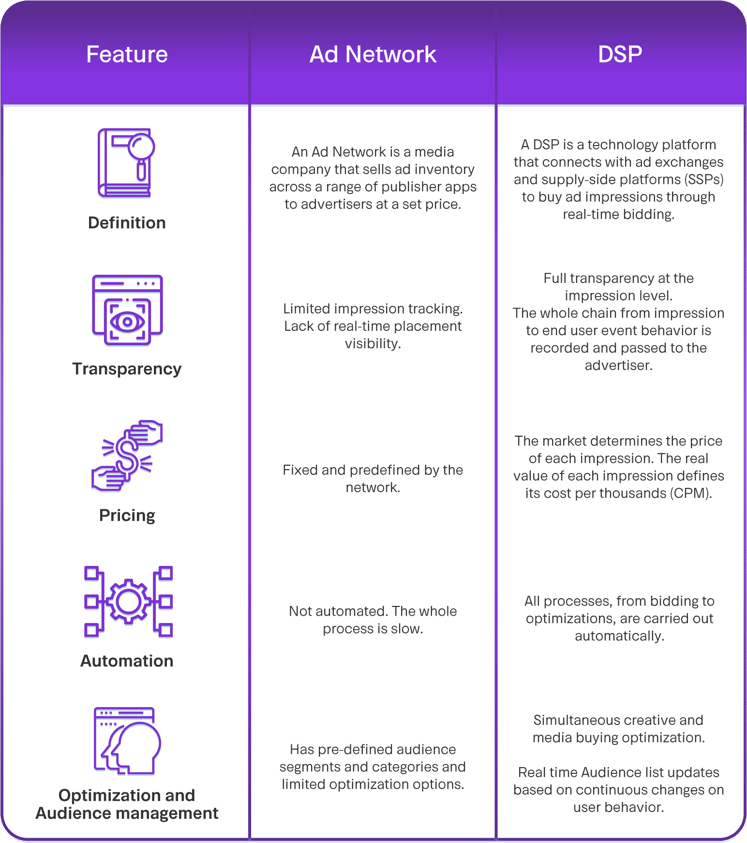 Are you ready to shift to programmatic? If so, we are here to help. Drop us a line and let us make your next app marketing campaign a hit!