Banner ads are one of the most popular ad formats in mobile advertising. And they have come a long way. The poorly designed, non-responsive mobile banner ad that pops up and interrupts a viewer’s mobile experience is dead. It has been replaced with an interactive and responsive banner ad, which is a great stepping stone for engaging with your audience, especially if you are looking for scale.

Banner ads are quick for a user to digest at a glance, which makes them perfect for brand awareness campaigns. They include imagery, copy, and a call-to-action (CTA) that allows the user to be redirected to the advertiser’s app after clicking on the banner.

Despite being the cheapest mobile ad format with the lowest cost per thousand (CPM), according to MoPub, banner ads are still the highest grossing ad format. Moreover, a study by Appodeal states that banner ads are the highest revenue-generating format across Latin America and Western Europe on iOS. Their extremely high impression volume make them a reliably strong monetizing format.

Banner ads come in different shapes and sizes but the best performing ones for mobile in-app ads are the below two:

The small banner, also known as Mobile Leaderboard, is optimized for mobile ads. It is often displayed at the very bottom of the screen and is designed to grab attention and drive impressions while improving click-through rates (CTRs).

The medium rectangle banner is a good starting place for display ads. It is perceived as less intrusive than bigger formats, like fullscreen interstitials or videos, due to its compact size. On the other hand, it is still large enough to add more details to attract the eye of the viewer. 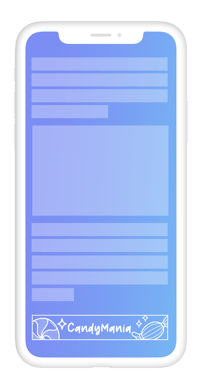 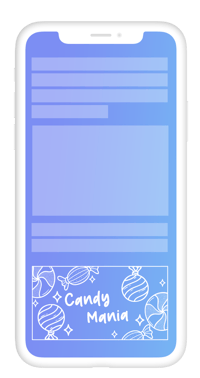 Irrespective of the ad size, animations grab users’ attention more easily than static ads. Utilize animations for your ad to get noticed, but don't make it too flashy or annoying, or you run the risk of looking like spam.

Given the small space, every word counts in a banner ad. So, it is important to have a direct and compelling message that is specifically targeted to your audience. Keeping the ad copy short and sweet is the key to success.

Maximize the small space by integrating and coherently laying out all the elements of your ad. Emphasize the logo and place it away from the other elements. Don’t use small fonts because in small banners they probably will not be readable.

Use your branding elements like characters and icons. Don’t forget about the branding colors.

To avoid blurry imagery and to keep your ad professional and crisp, any visual should be high quality. Make sure all elements of your ad are vivid and readable.

Ultimately, the goal of each ad is to trigger an action. A well-thought call-to-action (CTA) with the right copy and color is vital for your banner ad. Encourage your app users to take action by making sure the CTA button of your ad stands out.

No ad creative is universal so testing should be a priority to perfect the ad creative. Make sure you are targeting users with ads that align with their interests. Leverage multivariate creative optimization technology which allows testing multiple variants of ad elements to determine the most effective combination for a single ad. With this technology, you can test a combination of elements at the same time, rather than testing a single element. This might be a combination of a CTA, background image, color, characters, or the messaging.

Although banner ads are widely used for all app categories, our analysis shows that for specific app verticals they perform better than the other ad formats.

The metrics we have considered during the analysis are as follows:

Banners are the oldest form of mobile ads and remain the most widely used format. To maximize the return on your ad spend, use the creative strategies described above and be mindful of your ap category, and don’t forget to test, test, test!

Follow our Insights for more tips and tricks on mobile ad creative.