The State of Programmatic Advertising in China

At the end of 2020, mobile ad spending outperformed other platforms, achieving 13% market growth and comprising 62.6% of all digital advertising dollars spent. China continues to have one of the biggest mobile app markets in the world, where 96.3% of people in China aged 16 to 64 own a smartphone, and there where a total of $48.53 billion in total spend on mobile apps as of January 2021. As seen on the infographic below, there were also a total of 96.22 billion apps downloaded in China alone. 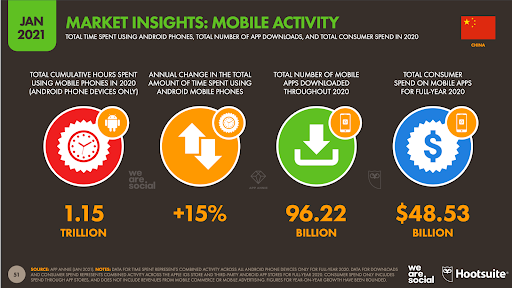 Source: Digital 2021: China, We are Social and Hootsuite

With China being a mobile-first country, they have popularized the Social & Live Shopping market. TaoBao Live, a popular live shopping app, had a 100% growth in 2020. According to J.P. Morgan, sales made through mobile devices account for 60% of the e-commerce market in China, with apps being the most preferred method of mobile commerce. Mobile commerce is expected to have a compound annual growth rate (CAGR) of 12% by 2023, making it a $1.8 trillion market.

China is becoming a hub for programmatic advertising. Several Chinese investors have acquired US ad tech firms and Western countries have started setting up operations in the country.

Programmatic advertising in China operates differently than in Western countries. While American ad tech companies handle either the demand-side platforms (DSPs), or the supply-side platforms (SSPs), Chinese ad tech players serve both sides. Local DSPs own ad networks, while publishers build their own SSPs. Check out this article by our partner AppsFlyer to learn more about the programmatic landscape of China.

China is known for its strict internet censorship policy which has limited access to several major platforms, including Facebook and Google. The country’s programmatic advertising marketplace is dominated by local players - Baidu, Alibaba, and Tencent, commonly known as BAT. As seen in this article by Statista, Baidu has a 76% share of the search engine market, Alibaba has 56% share of retail ecommerce sales, and Tencent has a 78% share of internet users on the popular messaging app, WeChat.

In 2018, China was known to be the world's largest gaming market having 620 million gamers, with 60% of the revenue of online gaming coming from mobile games. In the same year, the Licensing Freeze in China impacted the Globalization of China’s Games Market, consequently making regulation and licensing of digital games much stricter. While the freeze has now thawed, the approval process is still overwhelming complicated, which leads Chinese game studios and developers to focus on outsourcing to overseas markets.

Games under the umbrella of Chinese companies - including PUBG Mobile and Call of Duty Mobile - now dominate the international games charts, and Chinese tech giants like Tencent and NetEase are continuing to invest in Western and overseas studios that cater to markets outside of China.

Aarki designs creative variants, from the ground up, with localization in mind. Altering your message based on your target users’ geographic location will increase your chance of attracting your audiences’ attention and will make it seem like they are talking to someone who knows them well and can be trusted.

We ran a global user acquisition campaign in China for a card gaming app. We localized our creative to better resonate with the Chinese market, and we were able to get great results!

Programmatic advertising isn’t going to die down anytime soon, especially with the world’s increasingly digital lifestyle. China is catching up to be number one in programmatic ad spend. Though China can seem like an impenetrable market, there are ways to take your campaign global -- reaching higher engagements with one of the biggest markets in the world. To learn more about mobile marketing in China, book a meeting with our China team here.