There are more than 800,000 gaming apps available at the two major mobile app stores. But the average smartphone user only has about 80 apps installed on their phone, and only roughly one-half of the apps are used each month. The good news: you can increase your app’s chance of being installed and used regularly by making your ads engaging. And an essential step is choosing the right ad format.

There are four ad formats advertisers can choose from: display, video, banner, and native. For this article, we will focus on display, video, and native. The right ad format depends on an advertiser’s specific goal and marketing budget. We compared the performance of three gaming apps under different subcategories (Bubble Shooter, Poker, Puzzle) to see which ones worked and which did not. 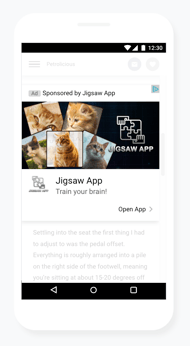 The campaign for the first and second apps ran display and video ads. Results from the first app showed that video performed better in all five metrics: cost per install (CPI), click through rate (CTR), conversion rate (CR), install rate (IR), and return on investment (ROI). The video ad format’s CTR was up by 15% and resulted in a 30% ROI.

The third app ran a campaign with three ad formats: display, native, and video. Similar to the first app, the video ad format outperformed in terms of the five metrics, with a 3x better ROI than display and video combined.

The data we gathered may show that the video ad format is the winner. There are two reasons:  First, users appreciate seeing the gameplay or game experience more closely, and video ads are able to provide that. Secondly, video ad formats are either rewarded or non-rewarded videos. Rewarded videos, or videos that are not skippable, push users to pay attention to the ad.

It is essential to note that, ultimately, the ad format still depends on your specific campaign objectives. Video ad formats may have better chances of working for gaming apps, but this might not be true for other categories. To know what will work best, keep testing.