An effective mobile app marketing strategy to acquire high lifetime value (LTV) users is cross-promotion. This allows app marketers to take advantage of their already existing or lapsed high LTV user base by promoting a new app to them. For example, an app developer has an existing app and has just launched a new app. Considering that both apps fall into the same category, the advertiser can promote the new app to the high LTV users of the old app. The theory behind this is if the users are driving the return on investment (ROI) of the old app, they are highly likely to do the same for the new app since the two are in the same category.

App marketers find that cross promotion strategy lets them optimize their app marketing campaigns for high LTV users instead of spending budget on acquiring new user who may or may not drive ROI.

To determine the value of cross-promotion campaigns, we analyzed a programmatic advertising campaign for a game app over a period of 35 days. To target quality users for the advertiser’s new apps, we ran global cross promotion campaigns on different ad exchanges.

The advertiser provided user lists from their existing apps to promote their new apps with an optimal CPI goal.

Our in-house designers designed multiple creative variants with a multitude of ad formats which were tested across thousands of publishers. After testing and comparing the performance of the creative through machine learning technology and multivariate testing, we increased media and budget allocation to the best performing creative based on the client’s key performance indicators (KPIs): installs and cost per install (CPI). 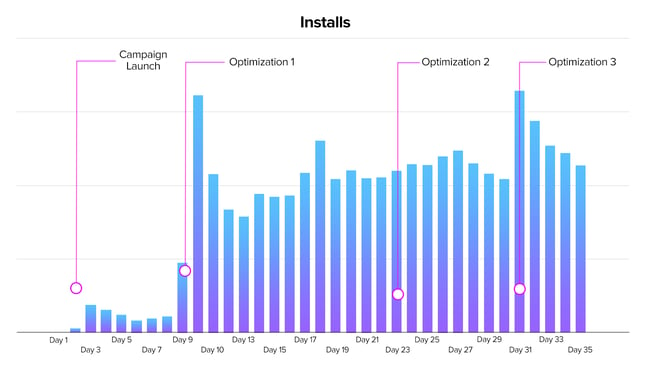 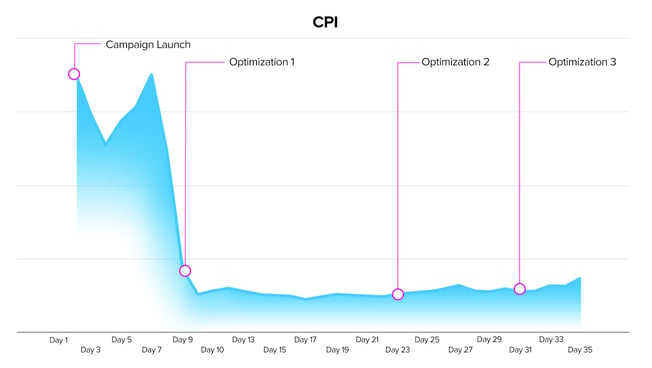 The cross promotion strategy had a positive impact on CPI as well. CPI on the first 8 days of the campaign was high, due to the optimizations done, we maintained CPI at or below the goal.

To learn about how Aarki can help you reach your app marketing goals with cross promotion, please email partnerships@aarki.com.