Gone are the days when advertisers were relying on the install volume and post-install events in analyzing campaign performance. Though app install remains as one of the most common key performance indicators (KPI), nowadays in an app marketing campaign, app marketers are increasingly becoming interested in optimizing campaigns directly on the return on investment (ROI).

In a real-time bidding setting, it is crucial to predict the expected revenue from a particular ad impression. With Multiplicative algorithm, Aarki determines the purchase probability, thus, ensuring that your ad dollars will be spent on the best users.

To determine the value of Multiplicative algorithm, we analyzed a programmatic advertising campaign for a game app over a period of 11 days. The advertiser aimed to acquire the highest quality users using their purchase and install data, at an optimal CPI. Using the advertiser’s attributed and non-attributed purchase and install data, we leveraged Aarki’s proprietary Multiplicative algorithm to optimize for ROI.

How does Multiplicative algorithm work?

The advertiser’s attributed and non-attributed purchase and install data is used with Aarki’s install probability, from there we get a determined probability, this probability determines the quality users that are most highly to purchase within the app.

During the first few days, when the algorithm was still adjusting, the ROI was low. However, we saw a huge increase in ROI on Day 5 and were able to sustain it for the rest of the duration of the campaign. Overall, we saw 4x increase in ROI with Multiplicative algorithm. 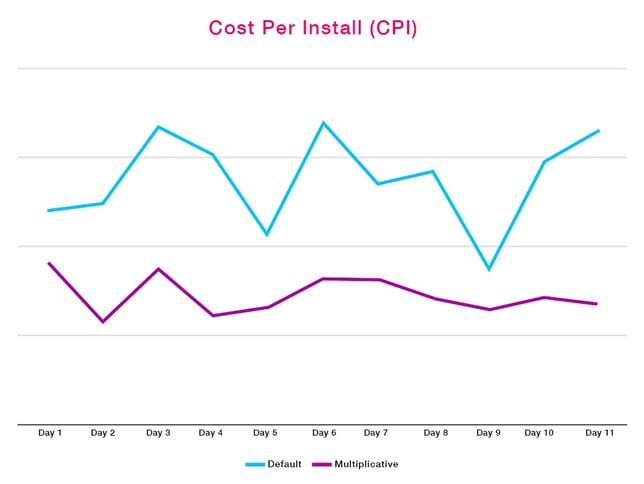 The results revealed that the implementation of multiplicative algorithm had strong performance on both metrics - increasing ROI and lowering the average CPI. This is a proof that Aarki’s machine learning algorithms improve campaign performance across various metrics and ensure that your advertising budget is spent on the right app marketing strategy.